But It's OK To Watch Big Brother, Kids

AN award-winning TV commercial showing a toddler driving a four-wheel-drive has been pulled off the air... "Many of the (80) complaints were from parents concerned that the ad would encourage copy-cat behaviour in young children and might lead to accidents." The board also found that the fact the toddlers were wearing seatbelts - instead of approved child restraints - also breached safety recommendations.

Yes, we must protect the cheeeeldren:

QUEENSLAND'S top doctor wants junk food to face similar advertising bans as cigarettes... chief health officer Jeannette Young said it was time for a crackdown on junk food ads. She won backing from state Liberal leader Bruce Flegg... "From a medical point of view, junk food is far more harmful than most people realise. As with smoking, there's got to be some hard decisions," Dr Flegg said. "Unfortunately, it will impact some businesses and so forth..."

But McDonalds are already hurting from all the toddlers who can't drive-through any more...

High Court Judge Michael Kirby has accused America of being obsessed with September 11:

... saying more people died each day of AIDS than perished in the terrorist attacks on New York and Washington.

It might equally be said Justice Kirby is obsessed with AIDS.

There wouldn't be a federal election due would there: 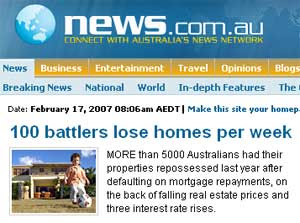 Actually, the 'battlers' include those who own:

Hardly the stuff the term 'battler' was intended for.

A must read feature from the Telegraph:

In all social change, nothing ever turns out quite as predicted. Campaigners tend to believe, Pollyanna-like, that human nature is endlessly perfectable, and all will be solved when new laws are put in place. In truth, human nature is rather better described by Dr Johnson, who observed that: "Whatever is done easily will be done frequently."

And that, I suggest, is the short answer to those who wring their hands asking why Britain's abortion rate climbs annually, despite the wide menu of contraceptive choice. Abortion is relatively inexpensive today: it is easily accessed and the acceptable social attitude is that it is simply a personal choice, with no moral or ethical dimensions. This is not quite how it always works out, but that is broadly the way it is seen.

Easy, cheap and accessible - why wouldn't it increase each year? More than one in 10 women in their late twenties to early thirties has had an abortion, according to a survey earlier this week. Moreover, some women actually prefer abortion to contraception as a means of controlling their fertility. An experienced abortion practitioner once told me: "Some women do not know whether they want to be pregnant until they are. They want to exercise that choice after the pregnancy has occurred, not before.

I believe News.com.au made a mistake with this headline:

It's really no news at all for anyone who has done a modicum of reading on the subject beyond hysterical headlines:

Man-made climate change may be happening at a far slower rate than has been claimed, according to controversial new research. Scientists say that cosmic rays from outer space play a far greater role in changing the Earth's climate than global warming experts previously thought.

But there is one thing they have got wrong:

They hope this will prove whether this deep space radiation is responsible for changing cloud cover. If so, it could force climate scientists to re-evaluate their ideas about how global warming occurs.

Not so - it could force climate scientists to re-evaluate where they get their government research grants from.

Catching part of Sin City this weekend reminded Nicky and I of the outstanding 1980s song Take On Me, by A-ha.

Not the song, which is infinitely more upbeat than the film, but the video with its outstanding mix of animation and live action.

Fish And Chip Shop Owner May Be Right

Much thinly-veiled amusement at the Brisbane Sunday Mail over a DNA test revealing:

FORMER One Nation leader Pauline Hanson, the outspoken proponent of polarising immigration policies, has discovered she is of Middle Eastern heritage... A recent DNA swab, taken with Ms Hanson's permission by The Sunday Mail, has revealed the controversial former MP's genetic makeup is drawn from a rich multicultural background, with 9 per cent originating in the Middle East, 32 per cent from Italy, Greece or Turkey and 59 per cent from northern Europe.

When told of the results, the former fish and chip shop owner appeared flustered, making references to "rape and pillage" in ancient times, adding: "All I can think of is that probably down the track it eventuated from some war.

It would probably never occur to the journalist that Hanson could be right.

In the 7th and 8th centuries, Islam spread by force from Saudi Arabia and conquered most of the Middle East and North Africa, crossing into Spain and pressing north, almost reaching Paris before the invading forces were halted at the Battle of Tours in 732. Map.

The Middle Eastern genetics of Hanson, as well as Queensland Premier Peter Beattie and former British Prime Minister Margaret Thatcher, may well be the result of rape and pillage by Islamic Crusaders in Southern Europe - almost 270 years before the first Christian Crusade.

AT least eight people were killed and several others wounded Saturday in mortar and grenade attacks in an escalation of guerilla-style attacks in the Somali capital... Mogadishu has seen a rise in violence, blamed on a defeated Islamist movement which has vowed a prolonged insurgency.

Update: Here's an excellent animated map showing the spread of the world's major religions - '5000 years in 90 seconds'.
Posted by Nick and Nora Charles at 7:14 am No comments:

So Mr Brown, for taking heat, here's a cocktail named in your honour:

A Voice In The Wilderness

Hopefully there may be more...

(Gina) Khan is particularly worried about how mosques are brainwashing children and young people: “To me, it is starting to look like a cult.” And her local community certainly seems to be in denial. “After the raid I went to the corner shop here, and they were all saying it was a conspiracy. I turned round and said, ‘No, it is not. Let us be honest’.

And did those feet in ancient time
Walk upon England's mountain green?
And was the holy Lamb of God
On England's pleasant pastures seen?

Who knows if He did.

But one thing is for certain, if He had, he wouldn't recognise the place now.

Crime is now officially out of control on NSW trains and law-abiding passengers cannot rely on any protection:

A RISING tide of thuggery and fare evasion on trains has led to railway ticket collectors being told to wave all passengers through - whether they have a ticket or not. With assaults and violence on trains at a five-year high, Sydney's CityRail workers yesterday described the softly, softly approach by management as "open slather" for ratbag passengers. A CityRail memo passed to The Daily Telegraph revealed the extent of anti-social behaviour on Sydney's rail network and the fear it has caused among staff.

CityRail passengers now have equal cause for fear.

Failure to police even the most basic infringement of the law as criminals pass through the turnstiles will certainly escalate crime on board the trains. Vandalism, muggings, assaults, rapes - you name it, the 'step-back' directive will contribute to it.

And all this at a time when governments berate the population for the 'environmental vandalism' of shunning public transport for private cars.

The choice between an hour and a half in a traffic jam or 30 agonising minutes in a graffitied carriage with rampaging thieves and rapists is a no-brainer.

"With U2 it's like play One, shut the f**k up about Africa. People don't want to hear about it all the time."

A British Muslim arrested and questioned in the plot to kidnap and behead a soldier thinks he lives in a police state:

The released men’s solicitor, Gareth Peirce, said: “They have left the police station without any better understanding of why they were there than when they first arrived seven days ago.

Perhaps it was his membership of a deranged death cult.

Other cult members demand better behaviour from the cops:

Allah Ditta, of Ludlow Road mosque in Alum Rock, where four arrests were made, said: “The police must do their homework and be very sure before they arrest anybody..."

Will after they have a body with a head on its chest be sure enough?

When does the education industry intend to formally apologise for its decades of institutionalised sexual abuse of those in its care?

A married teacher was found guilty yesterday of having affairs with vulnerable pupils he lured with flattery. Steven Edwards, 34, had relationships with three girls aged 14 to 16. A teacher at the same school was jailed last year for an affair with a pupil.

Posted by Nick and Nora Charles at 9:32 pm No comments:

Another Day In La La Land

Allegations of an assault by police that led to riots in an Aboriginal community have been found to be false:

In the CMC's report yesterday, Mr Bell told investigators that a member of the Aurukun Community Justice Group, Martha Koowarta, had asked him: "I think them two coppers were hitting you, hey?" Before being asked this question, he had spoken to members of his family and staff at a local medical clinic, none of whom were told police had struck him. "On the contrary, he told them that his brother had hit him," Mr Lambrides said.

That's ok though - Queensland Premier Peter Beattie will have the coppers charged anyway.