Police admit road rage is on the rise:

ROAD rage in Queensland is becoming increasingly violent, concerned police have warned in the wake of the shooting death of a young motorist. "Certainly it's something we probably didn't see 10 years ago that we are seeing now," Deputy Police Commissioner Ian Stewart said.

How could this possibly be? We've spent the past couple of generations trying to make the world a better place by completely re-engineering western society along politically correct lines and raising the rights of the individual to do as they please above all else. And it gets more violent? How confusing.

Off With His Head!

A BRISBANE radio station may have to explain why it should keep its licence after an announcer was accused of making anti-Islamic comments. Former Victorian police officer, now 4BC drive-time announcer, Michael Smith called for Muslim women who wear an Islamic hijab in public to be fined for offensive behaviour.

Smith's comments seem a little much straight out of the blocks - one normally eases into such things - but the general sentiment of distaste for one of Islam's most obvious symbolic combinations of conspicuous piety and the oppression of women is shared by many.

Indeed, two polls on the the 4BC website currently show vast support for the banning of the hajib in Australia and for religious headgear that covers the face to be removed on entering banks.

In the end, however, Smith could have said something so mildly critical as to be meaningless and the Islamic complaint squads would have still descended.

Is there anything an infidel does that doesn't offend a Muslim?

Not really; that's why Portuguese cardinal Jose Policarpo had little to lose with this:

(He) warned Roman Catholic women against marrying Muslim men. "Be careful with love. Think twice before marrying a Muslim, think seriously because it brings loads of hassle... When you recognise what a young European of Christian upbringing is subjected to, given Muslim attitudes to women, the first time she goes to their countries, we can imagine what that entails. You can only dialogue with someone who is willing to dialogue. With our Muslim brothers, for example, dialogue is very difficult... We have taken the first steps, but it's extremely difficult - because for them, their truth is the only way."

Little to lose except his head, of course. You mustn't offend the Religion of Peace. 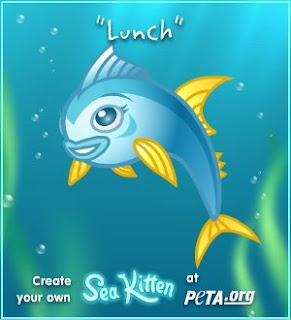 Words matter, despite the admonishment in the children's schoolyard rhyme.

Christians believe that God spoke the world into being and Jesus is described as the Word.

Words matter because they articulate feelings and communicate ideas; they can create or they can destroy.

Over the past few weeks Nicky and I have been discussing how the use of particular words are being used to influence social thinking.

Here's today's blatant example of words being misused in order to promote a political agenda - animal rights activists, PETA, are trying to make people refer to fish as 'sea kittens'.

And they have developed a game so you can create your own 'sea kitten' from cartoon avatars of flounder, tuna, salmon and trout.

Crazy? Perhaps. Effective? Quite possibly as this comment shows:

I love the idea! Fish get the short end of the stick so often because they aren't cute and cuddly. I love that PETA is suggesting this. And I love that everyone is taking it so seriously. I mean, c'mon! Are you all afraid that someone's gonna come along and tell you that you can't eat fish? Poor you! Think about how it would feel getting hooked through the jaw, dragged into a place where you can't breathe, then having your neck broken. All so someone who doesn't need to can eat you. Real considerate.

A very typical reaction of someone whose world view has been influenced into believing that harvesting a protein-rich food resource is the equivalent to killing a family pet.

Worse still, it is the world view of someone who sees no moral difference between killing a human being and killing an animal.

Mum's The Word
1 Shot Vodka
1 Shot Cherry Brandy
3 Shots Orange Juice
Shake all ingredients together with ice and strain into a martini glass.

'Openly homosexual' media commentator and former British MP Matthew Parris needs to go back to the playbook and find a new schtick because the jig is up on this one:

AS Belgian comic-book icon Tintin celebrates his 80th birthday, an age-old question has resurfaced: is the boy reporter gay? One commentator says the signs are unmistakable. "Billions of blue blistering barnacles, isn't it staring us in the face?,'' wrote The Times journalist Matthew Parris under the headline "Of course Tintin's gay. Ask Snowy", ahead of today's anniversary.

Proclaiming Tintin gay is straight out of the PR handbook After The Ball, written in the late ‘80s by Harvard social scientists Marshall Kirk and Hunter Madsen, themselves homosexual:

“...paint gay men and lesbians as superior — veritable pillars of society... famous historical figures are considered especially useful to us... invariably dead as a doornail, hence in no position to deny the truth and sue for libel.”

Being a cartoon character, Tintin is in no position to answer the claims either and one doubts author Georges Remi's estate would bother these days.

However, there's a lovely irony in other parts of Parris' column as he ignores Madsen and Kirk's admonishments to not talk about some of the more uncomfortable truths of homosexuality:

"Tintin never talks about his parents or family, as though trying to block out the very existence of a father or mother. As psychologists will confirm, this is common among young gay men,'' said Parris.

As the NSW Ambulance Service looks at buying extra large planes to transport grossly overweight patients, it's worth considering the causes of the 'obesity epidemic'.

Invited to vent their spleen in The Daily Telegraph:

Should taxpayers have to shoulder the burden of obese patients? Vote here and tell us below.

...presumably lean commenters on the above story have little sympathy for the overweight:

Kyle Ruxton of Kangaroo Flat Posted at 2:06pm today
Get the fatties to pay higher taxes to pay for all this extra equipment. Don't get other people to pay for it, after all, most people don't stuff their faces and claim they have a 'medical condition'. These lard arses need to take responsibility. Quit shovelling food into your mouth and there wouldn't be any need for extra equipment to transport these people.

"This should be a wake up call to the community to watch what they eat by cutting down on fats and sugars and increasing how often they exercise." (emphasis added)

It would appear to this lean observer that it's lack of exercise that is mainly responsible for the spreading issue of obesity.

Certainly our diets are broadly higher in fats and sugars than they were two generations ago but the problem of people of normal metabolism gaining weight from eating too much of this or that boils down in the end to a simple formula of input versus output.

Food of most kinds is converted to energy in the body and if the energy is not then expended, it's 'banked' by conversion to fat until it can be expended by activity.

People always have become overweight from failing to match output with input. However, the solution to our current problems aren't to be solved in obesity expert Garry Egger's way:

It's not government's responsibility, nor is it solely the responsibility of the obese as Mr Ruxton would have it, though certainly at the end of the day it's up to those suffering the problem to do the work that will overcome it.

However, when looking to apportion blame or fault, it needs sharing around.

Poor eating and exercise habits among the young are the responsibility of parents who lack the guts to tell their kids 'no' - no to sitting around the house listening to iPods, watching TV, surfing the net, texting friends and playing Wii and imagining it's exercise. No to 'aw, drive me to school'. And no to constant snacking and poor dietary choices unless they're willing to match input with output by substantially replacing the above sedentary activities with getting out of the house, watching the world outside, perhaps actually going surfing, meeting and playing with friends, undertaking real physical activities instead of virtual ones, and getting on the bike they got for Christmas and riding to school.

Of course, not all parents are 'no-phobic' pseudo-adults enslaved to their not-so-little emperors and princesses, fearful of not giving them their every whim and thus failing to be their children's 'friend'.

There's reason to believe many parents, and children too, are just plain fearful.

They're afraid of the outside world thanks to a media that often promotes danger as omnipresent. But this is Australia and it is still a lucky country in that its streets are not those of such urban warzones as London where kids stab and shoot each other in ever increasing numbers.

However, as Australia's social order shows signs of slipping down the British path, if we're not to allow that perception to become the reality here and give parents actual rather than imagined reason not to let their kids hide at home all day, we should perhaps call on government to address the social issues of violence in society.

In a roundabout way, we're back to asking government to do something.

The Courier Mail begins an interesting piece with a fallacious headline:

The story, about how younger women are going back to domestic tasks such as sewing and cooking, says more about the psychology of financially perilous times than it does about a feminist backlash - not that you'd know it from the headline.

So ladies, if you'd like to brush up on the domestic arts from years gone by, take a look through the goodies on Nifty Knick Knacks.

To begin the lesson let's try the classic cocktail - the Old Fashioned:

2 oz Blended Whiskey
1 teaspoon sugar
Few shakes of angostura bitters
2 or 3 tablespoons soda water
1 maraschino cherry and a little of its cherry juice
Combine the sugar cube, bitters and water in an old-fashioned glass. Muddle well, add blended whiskey, and stir. Add a twist of lemon peel and ice cubes. Add slices of orange and lemon and top with the cherry. Serve with a swizzle stick.