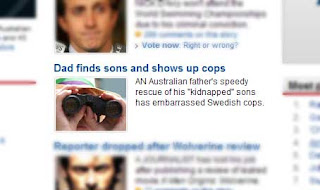 When the online sub writing the pointer decides they know better than the Swedish authorities and AAP's Stockholm correspondents:

The boys were allegedly abducted in October last year by their Swedish mother. She was charged with their kidnapping and became a wanted fugitive in Sweden. The father had custody of the children but the mother was granted access twice a year.

What would the Swedish cops know anyway? They were too dopey to track down the not-really-a-kidnapper who was being aided and abetted by her parents and, it has been suggested, a feminist group.

And who cares that the cops don't have the resources to stake out a house 24/7 for an entire week as did the father?

After all, everyone knows it's only a crime if a father "kidnaps" his children.