This on the front page of News.com.au: 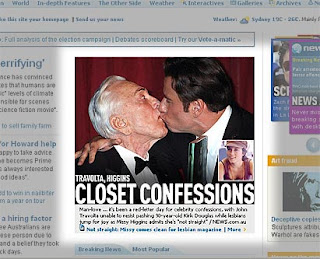 POPULAR singer Missy Higgins ... has appeared on the front cover of a national lesbian magazine, telling readers that she is not straight and believes sexuality is a "fluid thing".

SINGAPORE has lifted a ban on an Xbox video game... The futuristic space adventure video console game made by Microsoft was banned on Thursday because it contained what the Board of Film Censors described as a "a scene of lesbian intimacy".

(The game has been cleared for viewers 18 and over; in Australia it is fit for 15 years olds; in the UK for 12 year olds.)

No wonder we get to this: 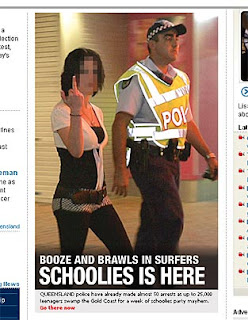 Child psychologist Michael Carr-Gregg said there had been a rise in sexual practices among teens copied from internet pornography, and leavers' (schoolies') celebrations were no exception. "Things like group sex have become quite popular and that would simply not have happened a couple of years ago,'' Dr Carr-Gregg said.

I've said it before and I'll say it again - it's all about context. There's nothing wrong with pornography in its non-violent forms as long as it's restricted to adults.

But when we're bathing children in it and their pop culture role models are spruiking 'sexual fluidity' in public, well... ah, figure it out for yourself.

Email ThisBlogThis!Share to TwitterShare to FacebookShare to Pinterest
Labels: Society