The UK Daily Mail points to a story from its home page: 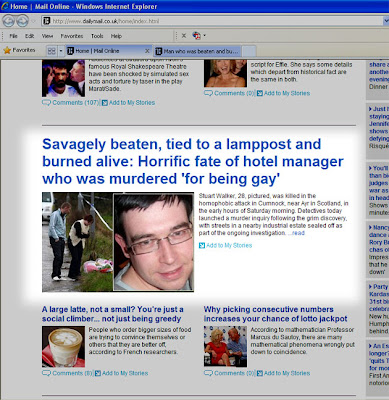 Savagely beaten, tied to a lamppost and burned alive: Horrific fate of hotel manager who was murdered 'for being gay'

Stuart Walker, 28, pictured, was killed in the homophobic attack in Cumnock, near Ayr in Scotland, in the early hours of Saturday morning. Detectives today launched a murder inquiry following the grim discovery, with streets in a nearby industrial estate sealed off as part of the ongoing investigation.

Paragraph #1: A gay man who was killed and left at the side of the road with 'horrific' injuries could have been the victim of a homophobic attack, it has emerged.

Paragraph #7: Strathclyde Police would not rule out that Mr Walker had been murdered because of his sexuality and were now closely examining all aspects of the victim’s life.

Photo Caption: Killed: Stuart Walker was found dead with 'horrible injuries' by the side of the road and may have been the victim of a gay hate attack

Nowhere else in the 17 paragraph story is the victim's homosexuality mentioned.

The crime is horrific, the victim's suffering terrible. But there are numerous other potential motives and leads in the case. The police refusing to rule out the victim's sexuality most likely arises from a question by the journalist herself.

However, she and her newspaper choose to declare Mr Walker was murdered

as if the words in quotation marks are, indeed, a quoted accusation, then further states it as fact by describing it outside quotes as

Even the URL of the story perpetuates a position not supported by anything in the story:

Who does it benefit to distort the truth that the motive for this bestial crime is unknown?

It certainly doesn't benefit the credibility of the journalists or newspaper involved.