It's no surprise whatsoever that the media is making a meal of this:

The court heard the three engaged in some "mild intimacy" but, as the two women became more involved with each other, (he) decided to leave. He drove off but, drunk, crashed into bushes. His partner ran after him and tried to take the car keys from him.

By this stage others in the camping area were looking on. As the woman again grabbed at the keys, (he) slapped her and pushed her to the ground.

DLB of Sydney Posted at 9:18 AM Today
every mans fantasy (except this bloke's) coming true.

... and moral in the prudish PC way in that the man concerned got his come-uppance for not falling in with the crowd.

The court case relating to this took place on March 19. It took five days for the Australian media to widely report - way to go, newshounds! - and less than 24 hours to go global.

Now let's look at STATE OF TASMANIA v (ACCUSED) 19 MARCH 2010 COMMENTS ON PASSING SENTENCE, but don't bother clicking on the link because here are the judge's comments in full:

You have pleaded guilty to two counts of assault which relate to one event in April last year. The complainant is a woman with whom you were then in a domestic relationship. That relationship has continued and you have since become engaged to marry.

The complainant has a child by another relationship, whilst you have two. The children were living with you and there are no children of you both. You were camping with your children and a number of other people, including teenagers and children. The complainant had made arrangements with a female friend of hers to travel up from Hobart to join you. During the evening it was revealed for the first time to you, so I am told, that the complainant was bisexual and she intended to engage in sexual activity with her female friend. Apparently the complainant plied you with alcohol to make you more receptive to this notion, and at one stage the three of you were engaged in mild intimacy. In any event, matters reached the stage where the sexual encounter between the two females appeared imminent, at which point you got in your car and attempted to leave the camping area. You travelled a short distance before crashing into some bushes. The complainant and a young man tried to take the keys from you, but you managed to restart the car and drove off again. Shortly after, you stopped and the complainant made a further attempt to retrieve the keys. It was at this point that you assaulted her. You first pushed her to the ground and slapped her about the face. Shortly after when she tried to run away, you punched her in the head, chest and back. You both ended up in her car where you put your hands around her neck and choked her. She appeared to lose consciousness for a time and you maintained an aggressive and uncaring attitude when others were trying to help her. Police attended and you were arrested. You spent the rest of that night and most of the next day in custody.

The complainant suffered some bruising and a sore neck but has fully recovered. She has been reluctant to see the matter pursued. I am told, and I accept, that there was no violence in this relationship, nor has there been since. I am also told that you do not frequently drink alcohol and that you were heavily intoxicated on this occasion due to the complainant's actions. You have no recollection of the events at all. Whilst this may serve to explain your conduct, it does not excuse it. Health problems impede your chances of work and you are on benefits.

Normally instances of domestic violence are treated seriously as a breach of the trust in the relationship. Prevalence is another relevant factor, and it must be noted that the events were witnessed or heard by a number of children and young persons. However, there are unusual features of this case. You became angry and frustrated when attempting to remove yourself from the situation. The violence occurred when you were attempting to leave the scene, rather than as an immediate reaction to the complainant's conduct. There is a relevant prior matter involving police but that is of considerable age and appears to have been relatively minor. I accept that you are remorseful and that there is little likelihood of repetition. Nonetheless the assaults remain serious matters. They were persisted in for some time. Far more serious injury could have resulted and the whole incident was no doubt stressful for the witnesses. As a matter of principle, the forgiveness of the victim is of some relevance, but of no great weight. The seriousness of the matter needs to be marked in the sentence.

You are convicted of the two counts and sentenced to a total of three months' imprisonment, the execution of which is wholly suspended on condition you be of good behaviour for a period of two years. You will also have to pay the victims of crime compensation levy of $100 within 28 days.

What are we to make of this?

In the first instance, the couple have reconciled and even become engaged since the offence took place and in that one sincerely wishes them - and their blended family of three children - the very best of luck and happiness.

But the deed is done and bears examination, thought not for the sake of the individuals involved who might best benefit from being left alone, but for the way in which it reflects on the media's drooling, salacious nature and the way it mocks the fallability of ordinary people but celebrates genuine corruption, and also to highlight the gross hypocrisy of society at large.

Even a cursory scan of the sentencing comments reveals:

2. It was a family camping trip with their 3 children and other children in close proximity.

3. A reluctant participant who does not drink frequently was plied with alcohol.

4. Made drunk, the reluctant participant permits 'mild intimacy', a description that infers probably little more than kissing and touching outside clothing.

5. The judge comments: '...matters reached the stage where the sexual encounter between the two females appeared imminent' and the man attempted to leave. This suggests he was not really invited to the party, he was a 'third wheel' who wanted out.

6. He only drove drunk (a modern cardinal sin) because he'd been got drunk to faciliate his acceptance of something he didn't want to do.

7. He did not assault his wife (the penultimate modern cardinal sin) directly for her actions in respect to the other woman but in anger and frustration at the final act of emasculation, her attempts to 'protect him from himself' as he tried to flee what must have been a humiliating situation.

Frankly, I believe this man deserves some sympathy rather than the bagging he's been getting, and both he and his partner deserves support for having the faith in their relationship and commitment to it to move on together. And whatever way they have have come to terms with what happened, I wish them all the best in the world.

More than that, I offer them this from today's News.com.au: 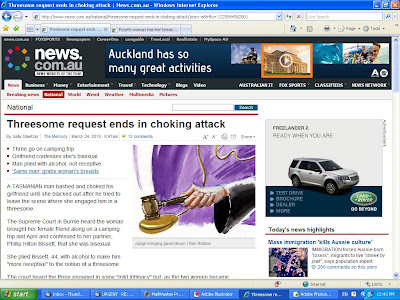 ... in which the standfirsts suggest he is the 'same man' as the perpetrator of a number of Sydney sexual assaults.

That linkage between his case and the Sydney case is likely worth a reasonable number of dollars in defamation.

Incidentally, to many commenters on this story at various news sites around the world today, I suggest imagining it was the male getting the female drunk for an unwanted sex act and seeing how you feel. And if she physically attacked him? Who do you think would be facing charges?

Footnote: I have edited out the name of the man concerned in this case for a number of reasons, not least of which is I believe he - and his wife-to-be - deserve a break.

The media doesn't.
Posted by Nick and Nora Charles at 7:37 pm